Aura, Aura, Who's Got the Aura?

[This story will take some time in the constructing.

Students of Ortho-Bionomycan file under Phase 6.] 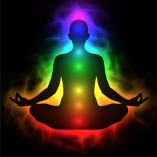 The Man Who Had No Aura

I arrived at Baeleay Callister’s charming cabin in the woods on the Sunshine Coast of British Columbia quite worn from a full day of travel, having just made my way from a week-long Ortho-Bionomy gig on Salt Spring Island. Baeleay and I were going to be leading a workshop in her home the next two days.

Baelaey informed me on arrival: “There’s going to be a small study group meeting in just a bit. It’s a regular get-together. Some of them will be coming to our workshop. You can just relax, no need to participate.”

I was introduced, some small polite social exchanges made, and I extracted myself, for recovery and reflection. They met, they left, and then the fun began. Baeleay got a call from one of the participants. Synopsis:

That man has no aura. I found that deeply disturbing. I don’t think I can come to the workshop, even though I said I would. In fact I don’t know why you would teach with such a person and invite him as a guest into your house. In fact I cannot understand how Ortho-Bionomy could have not only allowed such a person to be a member, let alone an advanced instructor. I cannot trust Ortho-Bionomy. I will no longer be a member or have anything more to do with Ortho-Bionomy.

I recall this incident because I’ve been thinking about auras lately, noticing auras in a different way, experiencing a change. Going out (I had a medical appointment) in this time of social distancing I noticed as I passed by other people that people’s auras had grown larger. Signals were emanating “keep a greater distance.” Or was it actually that I had grown my bubble, the message from my interior telling me to keep a greater distance; a message I mistook as coming from outside? My Theory of Mind telling me the inner process of the others is the same as mine. The remarkable thing was how palpable it felt, like space had thickened like a sauce.

There are a few DVD compilations of Arthur Pauls talking about and demonstrating aspects of Ortho-Bionomy. One thing stood out for me in watching one. The setting was a class and a student asked Arthur, how big is the aura? Arhur’s reply, “It’s as big as the distance between you and the other person.” So whose aura is it? What Arthur implies here is that the aura has something to do with the relationship shared by the two.

There is a story told by the neuroscientist Michael Graziano, in his audio book The Spaces Between us. He talks about the “escape distance,” or “flight zone” of animals. I have transcribed it from the audio book:

I saw a particularly clear example once back when I worked with primates. A little girl monkey was in a large enclosure filled with climbers and toys that we had collected for her enjoyment. She used to exercise in that enclosure a few hours a day and I would sometimes sit quietly in a corner and watch just for the pleasure of seeing an excited and playful simian. She would bounce around the place like a gas molecule. On one occasion as I was watching, I began to notice something peculiar. The pattern was so subtle that I had to collect data in a notebook to see it. Her movements seemed random, jumping to whatever caught her fancy. But when averaged over time, they formed a kind of a donut. She simply never went into a specific part of the enclosure. Right at the center of that taboo zone was a stuffed toy monkey that we had put in for her amusement. It obviously didn’t amuse her. She didn’t scream at it, face it, grimace at it, cringe away from it, show any fear or any anxiety. She didn’t show any overt reaction at all. But her ongoing behavior was profoundly shaped by it. She knew it was there and kept a specific distance from it as if it were ringed by a magic circle. Of course the magic circle was actually around her. It was her safety buffer, with respect to a freaky monkey with button eyes. Animals have a safety buffer with respect to threatening objects, predators, and even other individuals of the same species.

[This program keeps deleting sections of what I've written. I have to come back and reconstruct what disappeared from here. The rest of the following I did in Pages and think I still have. It has been a very strange day, collywobbles plus a surround of emotional meltdowns and widespread aura of coronavirus.]

Here is a given: Nothing exists but in relation to other things. Meaning exists only in the relationship between thing. The same way music comes from the space between notes.

Our particular set of sensory receptors, all told, provide us with a certain band width of access to the World. This is that portion of the world that can have meaning to us, that we can engage with. Every living organism has it’s own unique set of sensors. Each species of creature has its own world.

There are many native mushrooms in Hawaii. The indigenous people of Hawai’i had no word for mushroom. They identified more than 700 different varieties of taro (kalo), each with it’s particular ceremonial and culinary usage, but not one word pointing to the fungi all around the, many vividly colored. As it happens, native Hawai’ian mushrooms are neither poisonous nor edible. Nor are any hallucinogenic. I’m told they taste quite horrible. No practical use, no impact on their lives. Meaningless. I’m guessing they were not even seen. This is what language can do, once you name it you can see it.

Even with our limited sensory bandwidth we still select out of an array that would otherwise be overwhelming. Are senses are more generous than our brain can deal with. Perception further whittles down the world. How we whittle is culturally determined.

A very early reflex of an infant is to direct attention to eyes. Most often it will be mother’s eyes. Very soon then another reflex comes into play: look at what mother is looking at. By what she looks at (and maybe more importantly what she avoids or ignores) the infant begins the process, guided by innate reflexes, to see how much of the world she should see.

A basic tenet of communication theory is this: you cannot not communicate. If you are dead, you are communicating. There is information that means something to something. Social information is at least as important to humans as what we call the “natural world.” It is by banding together into social groups that the species has been so successful (success measured in terms of numbers of humans spread widely over the planet). The processes that bind us one to another are nearly as important as the complex of processes that keep the organism alive. The conscious mind is not allowed access to these processes. Homeostasis is automatic. The pH, fluid balance, amounts of circulating electrolytes, temperature regulation, blood pressure, on and on. The more one tries to focus on these sorts of things the more likely they are to get off balance. It’s like telling yourself you don’t trust yourself to keep yourself alive without constant attention.

Our senses take in a constant flow of information about the state of those around us. Most of it is through things we don’t notice. A subtle change in color, pupils open or close; how many of us closely attend those to things. Much of the information we can’t notice even though it lands somewhere and changes a behavior. We each radiate a chemical rainbow of pheromones. We have olfactory receptors for these chemical signatures but they do not wire into the areas of the brain where I can say, I smell you.

Sensory receptors is only the beginning of the story. In order to see, smell, hear, taste, feel, in general to sense and know you are sensing the senses must  send wiring into the brain that land in the little room of awareness. Many senses go direct to action and bypass awareness. You are aware of the action but don’t have any notion what caused it. I am drawn to you, I want to avoid you. Then we make up some story to explain the behavior or the tendency.    more to come...

The Root of the Matter 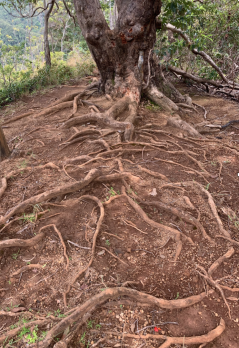 Recently on a walk on Manana Trail I was was aware how respectful people were being, careful to maintain a larger distance. I recalled my first outing into the public in the early days of social distancing, when it was just becoming a thing, before it was mandated. It felt like people's auras had grown. They seemed to be much more strongly palpable. At the same time I could feel my own internally driven urge to maintain distance. No doubt what I was feeling as a force emanating from others was my own desire to not get too close. The closer I get the more constraint is put on my encroachment.

But this is information coming from others. Subtle changes in expression and coloration, a nearly imperceptible stiffening. There is also  theory of mind at work. I am assuming other people are having internal processes going on much similar to mine.

I was recalling all of this as I was walking on a pavement of living roots of casuarina trees. The spread of roots, here making a solid mat of wood, is what allows the tree to make its “pinnacle to heavenward.” These roots make of all these trees one tree. The roots anchor and they spread nourishment to the whole community. For a tree to go up its roots must go down.

Back to social distancing. It is important to notice that it is not antisocial distancing. The message emanating through expression, posture, chemical plume is not “I hate you, don’t come any closer.” The message mostly is more that I care for you and we will find ways to be closer while farther apart; intimacy without proximity. In order to expand the aura farther outward, we must send its roots in that much deeper.

As I was driving the 2.6 miles from my home to the Manana Trail I was aware that people were behaving differently. It was not uncommon to see people walking in the middle of the road. I noticed other drivers were driving more slowly, carefully. I noticed I was drving more slowly, more carefully. No one was in a paricular hurry to get wherever they were going. What signalling is going on to coordinae this significan change in behavior, this change in the human aura?

I thought again about the tremblers depicted in the German television series, Babylon Berlin, and the cultural determinants of the expression of what we are currently calling posttraumatic stress disorder (PTSD).