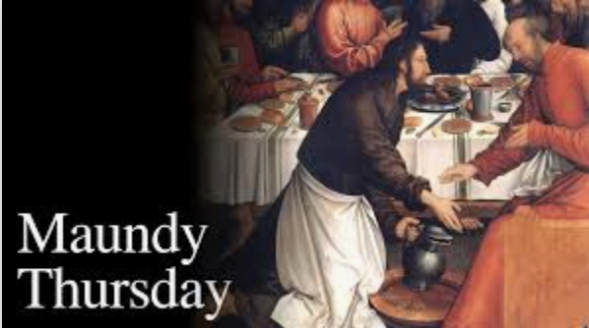 Note on etymology from Wikipedia:

Maundy is the name of the Christian rite of footwashing, which traditionally occurs during Maundy Thursday church services. Most scholars agree that the English word maundy in that name for the day is derived through Middle English and Old French mandé, from the Latin mandatum (also the origin of the English word "mandate"), the first word of the phrase "Mandatum nobum do vobis ut diligatis invicem sicut dilexi vos"   ("A new commandment I give unto you: That you love one another, as I have loved you, that you also love one another.") This statement by Jesus in the Gospel of John 13:34 by which Jesus explained to the Apostles the significance of his action of washing their feet....

Others theorize that the English name "Maundy Thursday" arose from "maundsor baskets" or "maundy purses" of alms which the king of England distributed to certain poor at Whitehall before attending Mass on that day. Thus, "maund" is connected to the Latin mendicare, and French mendier, to beg. A source from the Shepherd of the Springs, Lutheran Church likewise states that, if the name was derived from the Latin mandatum, we would call the day Mandy Thursday, or Mandate Thursday, or even Mandatum Thursday; and that the term "Maundy" comes in fact from the Latin mendicare, Old French mendier, and English maund, which as a verb means to beg and as a noun refers to a small basket held out by maunders as they maunded. Other sources reject this etymology.

I am only familiar with Maundy Thursday from having participated in the the Episcopal liturgical calendar for several years. It is the Thursday followed by Good Friday, Holy Week culminating in Easter. It became my favorite part of the entire celebration because I loved getting my feet washed; eventually I loved more to wash others' feet. Then it became not at all about the foot washing but about preparing myself for loss, porously sitting with grief. It is an essential part of the Joy of welcoming the new.

I have taken up the practice of fasting for a day. I truy to have a routine with it, like two specific days per week. I doubt it will ever become routine but a constant conversation around the question, Is today a good day? Sometimes the answer is a clear No and sometimes more equivocal, Well, I'll give you to evening time, then I take over.

Fasting is a kind of Maundy Thursday. Though I do not do 'cleanses,' purgatives or scrubbings; no more than what body does with no kibbutzing, no 'expert' intrusions. There is that willingness to sit with hunger, like sitting with loss and grief. Be there with it, in a calm and peaceful state. Have a conversation with the humger.

Will there be a fresh start? Maybe . . ., but there is at least that door opening wider, becoming more possible.

Fasting feels like it is a way to hit a reset button. Some recent research, for what that's worth, point in this direction. Perhaps it lets parts of the systems do some long-deferred repairs. Maybe alerts get sent out putting systms on alert.

A kind of balance gets restored, a balance between taking in and giving back; a reminder to take no more than you need and to figure out what you really need you may not be getting, trying to fill those gaps with 'food.'

Am I getting into the realm of negational theology? I fear I am; I hope I am. Can you find the thing more strongly through its absence? This question takes us into isometrices and 'not doing and  the practical engagement with an interpersonal body schema.